2015 has been a promising year for professional tennis player and Old Boy John Millman (2006). A wild card entry into the Brisbane International in January saw him to progress to round two where he almost caused an upset against world number two Roger Federer. After bowing out in the first round of the Australian Open and failing to qualify for the French Open John’s form resurged in June when he secured his first Grand Slam main draw entry at Wimbledon. In doing so John became Churchie’s third Old Boy to compete at Wimbledon – Ian Ayre (1947) played singles in 1953 and John Decker (1962) played mixed doubles in 1966.

A first round win over Tommy Robredo, followed by a second round loss to Marcos Baghdatis in a five set thriller, was enough to see John break into the ATP Top 100 in world rankings for men for the first time in his career. On the ATP Challenger Tour this year, John has won three titles. Two of these were in the US in August (the Lexington and the Aptos Challenger) and more recently the Kobe Challenger in Japan last month. Ultimately John hopes to break into the ATP World Tour series and with a current world ranking of 92 you can’t help but think that such an accomplishment is just around the corner.

It is also wonderful to see the Churchie Old Boys network in action. John is now sponsored by fellow Old Boys Tim Nelson (2002) and Scott Nelson (1997) through their Brisbane based web design agency, TPR Media. They have also set John up with an official John Millman website.  Click here to check it out. 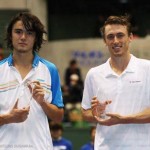 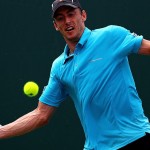